Alexis Tyrel, a story to be told

Only recently we launched a premiere for one of the tracks on Alexis Tyler aka Gideon’s upcoming album ‘I know You know I know’. The album contains ten awesome tracks and will be out on vinyl as well.

The Dutch producer is what we believe one of a kind as he keeps his stakes high and constantly seeking new limits. From what we heard and read his goal for this year is releasing not less than ten albums. Find out all about this goal in the interview below.

Alexis Tyrel comes from a long way. Back in the days, as a kid, he got bitten by the hardcore virus and ever since he became a prominent figure in the Dutch underground nightlife scene. Not only as a DJ or producer but also as a promoter and clubber. So the motto ‘never trust a DJ that does not dance’ doesn’t count for Alexis. Although he has his principles behind the booth.

Over time he continues to investigate and explore the various facets of electronic music which led him to start up his own label in 2003. ‘Lessismore’ is a platform through which he releases his own music and that from like-minded artists. Also his latest album ‘I know You know I know’ appears on ‘Lessismore’. This time under his name Alexis Tyrel and not his alter-ego Gideon.

To make his promise of releasing a lot of music he ended 2017 with the album ‘Return To Planet Alpha’ and the next chapter of his hit single ‘Rebecca Loos‘ on Bonzai Progressive. In February ‘Outcast From Darkness’ will be released but as Gideon.

So much happening with this sublime artist. So let’s see what he had to say …

Thank you for your time. Also for letting us showcase one of the tracks on your upcoming album “I know You know I know”. Sublime work. This is music we can play all day, over and over again. How did this magnificent album with 10 tracks, come together?
Thanks for having me and for your kind words. It was a project that has been pending for more than a decade. I think I lacked certain technical skills to finish it in the proper way. Besides the concept of the sound design.

In my head things came together and I went back to an old feeling/idea and finished the album.

For me, this album is about shortcomings of leadership and the time it takes to implement an idea. The trigger to finally finish this album were two conversations with the CFO of the organization I work for. He told me about how he led his team and acknowledge that he did not know everything that went on in his department. The other conversation was about I think Mondriaan and that no artist starts as a minimalist. In my head, things came together and I went back to an old feeling/idea I had and finished the record.

The album also got quite some excellent feedback. Is this what you expected?
I have not read the feedback, I am not a big reader. Furthermore, I did not expect anything, you can only hope that people will like it. When making music I do not think about stuff like reviews or the opinions of others, I just focus on my music. Sometimes, before I release something on Lessismore, send some friends tracks to listen to, problem is that the feedback can get me thinking and effect my final selection, this can be good but also bad. Sometimes you just have to trust your instinct and gamble on it.

Are you a workaholic? We are asking because we read about a resolution you made about releasing 10 albums this year. Why so many?
Workaholic, uhm, probably. I have some addictive genes so… Why so many albums, first off, I like the idea of an album, it is more interesting than a single. An album has something special to me, it is a total concept and it leaves more room for musical variation, furthermore, it is a bigger challenge. The effort you would put into an album is probably more than in a single, so to me, this is a good thing. Finally why 10, I am a numbers guy so 10 seems like a nice even number.

Quantity over quality? Or when is something good enough for you to be released and please a crowd?
In the context of music I would say; quality. But maybe because of the quantity I am doing, it will increase the quality of my output. Am I making sense? Maybe because of the pressure that I put on myself this will enhance the creative musical result. But this is just a theory that I am taking into practice. If it works there will be good music, if it does not work, maybe not so good. I am looking forward to the result of this project as the process is a pretty hard one, but still, I like a challenge.

Then again, when is something good enough to release? That is something difficult. For me, at this moment it depends on the final product. This is when a track is mixed and mastered, which I all do myself. Sometimes you have a song you like but the sound (balance of the mix of the layers and mastering) does not work in your head. Then it’s not the time to let it go. Sometimes, it is the arrangement but I have fewer problems in this area.

Also, I am not a typical crowd pleaser. And surely not like the new breed of entertaining DJ’s who are jumping on stage.

Also, I am not a typical crowd pleaser. First of all, I do not look and wave at the audience when DJ-ing. I focus on trying to create a nice and interesting DJ mix. And hopefully this gets the crowd going without telling them when to move by making gestures with my hand. I am not like the new breed of entertaining DJ’s who are jumping on the stage. And I am the same person when I am making music in the studio. I do not think about the crowd, I think about the music. For me, that is the only way it works. Otherwise, I will probably make more Mc Donald’s sounding music.

With so many things going on, what is the most exciting news you have in the works for the coming months?
Musicwise I have four albums finished already. Four of the ten on my schedule. Three are in the process and one of these three is almost fully done as well. Further, I am working on a visual/video project, which is exciting for me. I can not get into details about the project right now, but if we get it off the ground, it would be a dream coming true.

Music is not only something that makes me happy, it is also a struggle.

Maybe an awkward question but what would be the one thing that would make your musical career more successful? Where do you see yourself in 5 years?
As I am more a hunter-type than a farmer-type, I am more a guy that lives day by day. I do not think 5 years ahead. The music is not only something that makes me happy, it is also a struggle. Fixing things, seeing that you are less skilled than you think and not being able to fix the things you think are necessary, that is confronting. But to me, music is an addiction, that helps me be more balanced. Career-wise I do not really have targets, but music wise I hope to be able to release nice but also crazy music and be fearless in doing so. Hopefully, this will lead people to a less defined journey that leaves room for diversity.

Looking back from the past up until today, Do you feel there was a “breakthrough” point after which suddenly things changed for the better and brought you to where you are now? If so, what was it and why do you think it happened?
I started at the age of 13 DJ-ing hardcore/gabber in my room. This developed to techno-sets at venues like Ostgut/Berghain, Tresor, Flex, Arma17. So it was an unplanned path which developed slowly. I think starting up Lessismore in 2003 was the point it got more serious.

How do you want people to describe you as an artist?
I am just a guy that is very into electronic music and have been doing this the most part of my life. What people think and how they describe me is up to them. But to fill it in a bit, I think they can describe me as an old skool DJ/producer who is from the good old days of electronic music and loves and respects that musical period, and who on one hand tries to hang on to that old feeling but also wants to go into the future.

Any chance of seeing you play live this year?
Probably not, doing live sets is not my thing. I have done this is the past but my origin is being a DJ and I feel this is something I do better than if I were to perform live.

Thank you very much!!

‘I know You know I Know’ is for sale on Beatport. 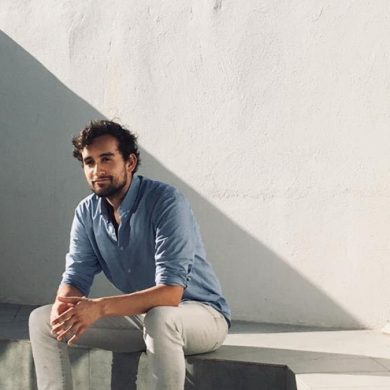