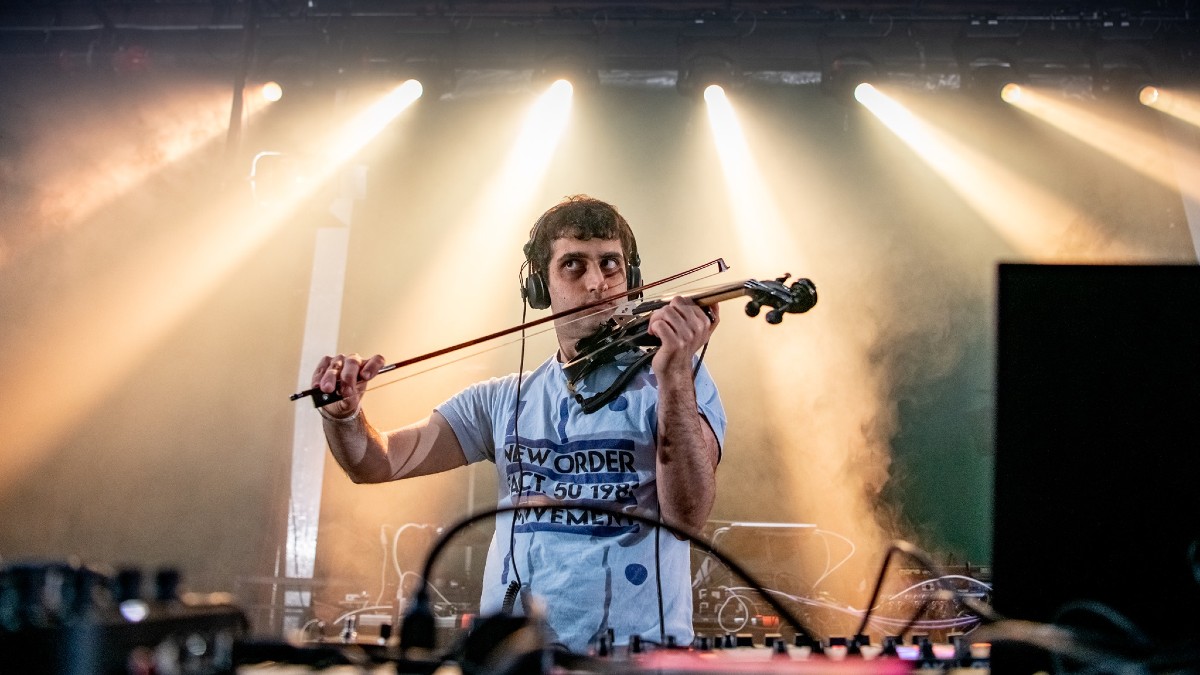 Beartrax, a true bastion of the underground

New York artist Beartrax is someone who’s been on our radar for some time, with his many memorable cuts tending to see the light of day on his most-discerning Melodize label. A true bastion of the underground, his canny releases often are him bring some seriously selective remixers on board, with his latest featuring a killer interpretation by none other than UK electro legend, Carl Finlow. Like everyone else, Beartrax has had a bit of a whirlwind 2020, but we caught up with him lately to find out more…

Tell us a bit about your year. How have you dealt with all the madness going around?

It’s been interesting, to say the least- I don’t think anybody could have predicted this but here we are.. It’s been a pretty busy time for me honestly. I took it as an opportunity to really buckle down and work on the label as well as my own production and DJing. Having all of this extra time indoors has been a bit of a gift in that sense, and I’ve been able to knock out tons of work.

I’m also fortunate to have a day job working as a lawyer and that’s kept me super busy as well. Not having to commute 1.5-2 hours every day has allowed me to get much more work done, so all things considered I’ve been doing pretty well. I miss going to parties/concerts more than anything, but I’ve taken the circumstances as a challenge to find inspiration in other ways and keep creating.

Have you learnt much on a personal as well as a professional level?

I think that this time has reinforced my perspective on life in that I know I’m doing what I love and appreciate the opportunity to spend my time every day on my passions of law and music.

You’ve put out some great music this year. Do you have a personal highlight? And has music sort of worked as a therapy for you this year?

Thank you. I think Ethereal was a breakthrough in my sound and really represents the straightforward, honest, melodic aggression that I’m trying to express in my music. I think the violin solo fit well in the track too and that laying back in the beginning and letting the arpeggios set the tone for the rest of the solo was a good approach. Music has been therapeutic for sure- as I mentioned previously, being able to indulge in my passions has been a great way to spend all of this extra time cooped up indoors and I’ve just taken it as an opportunity to be productive with all of the extra time.

Do you think the industry as a whole needs to take lessons from this pandemic?

I think there are definitely improvements that can be made. I think it would be nice if scenes did a better job of supporting their local artists and labels instead of booking big name acts for ticket sales and focusing on more intimate, authentic events. I think it will be very interesting to see who comes out on the other end of all this and how the scene will look like. My guess is that there will be some new faces in the game, but at this point who knows what will happen. I’m just focused on pushing my label and sound; no matter what happens around me, I’ll still be here plugging away.

Are you generally a political person? Where do you stand on the US government’s response to how they’re helping the creative industries?

I was a Political Science major in college and work as a lawyer so I am very interested in politics. I think that the US government has objectively dropped the ball with regards to helping out not only creative industries but small businesses in general. Many restaurants, clubs, theatres, etc. are hanging on by a thread and have unfortunately not gotten much, if any help from the government. The blame for this goes on both sides of the political spectrum and I don’t think that either Democrats or Republicans care much about helping the arts survive. This is more of a reflection on American culture as Europeans, especially Germans, hold the arts in higher regard and it shows in their government aid to the arts in this time.

Looking back a bit, can you tell us a bit about your favourite dancefloor memories over the years? And what is it about raw dancefloor that’s so special do you think?

So many amazing nights to pick from. The first one and most formative for sure was actually the first time I set foot in a club- I was studying abroad in Paris in 2011 and I went to Rex Club one night. I had no idea who was playing or what I was getting myself into, but I came out with my life changed. There was a M_nus label showcase that night with Troy Pierce and Barem headlining, and they absolutely crushed it. I’d never heard techno before and my mind was totally blown- I got a copy of Ableton not long after that and the rest was history.

Seeing Extrawelt at Shelter in Amsterdam last year was a great experience too. That, like Rex Club, is a medium-sized, dark, intimate room and seeing my all-time favourite artists in that setting was a real experience. I’d say Panorama Bar was also a highlight as well- there’s nothing like hearing some new wave/synth pop while the sun’s coming in through the windows in the morning after a few hours of thumping house. I definitely gained a lot of inspiration from having the pleasure of dancing there.

The releases coming out of Melodize have been really awesome of late. Can you tell me a bit about how you select the remixers etc? And what’s the overall vibe that you’re looking to create with the label?

Thank you, glad you enjoy them. Per the name of the label, I’m in love with melodic music. I go after artists whose music is generally melodic and musical. This is due to my background as a violinist and has played in orchestras and bands growing up. I like to have people on the label who are musicians as well as a result. I really liked the remixers I had this year from John Tejada and Clarian to Lauer, Fort Romeau and Carl. I have some in the works for next year too that I’m super excited about.

A lot of labels these days release too much music in the hope that something sticks. What’re your thoughts on labels who adopt this kind of attitudes? And has the whole digital thing had a detrimental effect in this regard?

I’ve taken the total opposite strategy of releasing quality over quantity- when I was coming up and releasing music on labels I too often saw labels release way too much mediocre music and not put much effort into promoting the releases only to see all of the releases get lost in the massive pile of digital music. A big reason why I decided to start my own label was that I wanted to make every release special and give them the care they deserve. As such, I’m only putting out about 4 records a year, or one record about every 3 months. With all the effort I’m putting behind each release, that’s plenty and I think it gives each release a shot to shine.

I also put each release out on vinyl and put a lot of effort into the artwork- I have a great team behind the label and am fortunate to be working with Alland Byallo, who does a superb job on the artwork, and Paradise Entertainment and DBH Music who do a fine job distributing the music and getting it out on vinyl as well as digital. It’s great to work with everyone and know that I have a hard-working, professional team that I can put my trust in.

We’re really digging the Carl Finlow remix especially. Can you tell us a bit about your first encounter with Carl’s music and why he’s such a great fit for the label?

Thanks! I first discovered Carl’s Random Factor work- he is so talented and has put out so much good stuff over the years on multiple aliases. I really like his melodic, musical take on electro which is why I thought he’d be a good fit on the label. He banged out an excellent remix and basically took all of the musical, acoustic parts of my track and recreated them into electronic parts which I thought was super cool.

With getting an artist you love on board for a remix, there’s always a chance you’ll be uninspired by their interpretation of their work. Are you generally trusting of the artist here or do you try and give feedback re: your exact wants here?

I’ll add my input if I’m not totally feeling the remix, but honestly, the majority of the remixes so far have been so great I’ve hardly provided feedback. I try and work with artists whose sound I really enjoy and try to make sure they’ll be a good fit for remixing the original, so I hope that filtering process makes things easier. I also try to reach out to artists who are generally professional in addition to being talented musicians and producers and that usually helps with getting things done in a smooth manner.

On that note, maybe you could fill us in on some of your favourite remixes of all time? And what do you think makes a great remix?

Extrawelt – Titelheld (Patrick Kunkel remix). A straightforward, no-nonsense and driving reinterpretation of my favourite techno song of all time. Beautifully executed by Patrick.

Kiki – Good Voodoo (Subb-An remix). An absolute bomb, from the hypnotic vocals to the synth stabs- this really sets the mood in the room.

No Turning Back – (Wighnomy’s Likkalize Love Rekksmi). Beautiful and majestic- this one makes the dancefloor stop and really sets a hypnotic, sensitive mood.

Finally, on a personal level, will you be making any New Years’ resolutions? And what else can we look forward to from you over the next while?

I’m not much of a resolution guy. I plan on just continuing to grind out work in both law and music and I think you can expect 4 solid Melodize releases in 2021.

Beartrax’s Dream Riff EP (featuring a remix by Carl Finlow) is out 27/11 via Beartrax’s Melodize label.