It’s been a storming and busy, decade-spanning rollercoaster ride for the Bern, Switzerland-born and now Berlin-based DJ, producer and Keno Records founder David Keno since he stepped on the scene with his first vinyl releases back in 2004.

Influenced by bands and musicians like Pink Floyd, Mike Oldfield and Depeche Mode and being classically trained on guitar and drums the young David Keno started his musical journey playing in various Rock-focused band outfits throughout his youth whilst a growing love and fascination for electronic music soon led into an early drum machine and synth experiments, followed by first remixes and more electronic edits for the bands he played in.

Fast-forward more than 15 years and besides taking on his role as A&R and CEO of Keno Records as well as collecting air miles as a member of the global DJ family, Mr Keno still keeps on working on a busy studio schedule, teaming up with like-minded fellow artists like Mat. Joe, M.in or Evan Baggs for mind-blowing collaborations released on labels like Dirtybird, Relief, and Robsoul. On the solo tip, he’s worked with well-reputable, internationally acclaimed imprints like Dirtybird, Hot Trax, Toolroom, Get Physical, Poker Flat Recordings, Traum Schallplatten, Snatch, Suara, Katermukke and many more.

His latest EP Miami lands on Dantze later this month, so we thought it was about time we had a chat with him.

You released your first record back in 2004 – how much has your approach to production changed since then, both in the equipment you use and the kind of music you make?

My equipment was of course much simpler back then. I had a computer and one crappy synthesizer. My first sequencer was Magix Music Studio which was very limited. But looking back now, this limitation was also pretty important for me. You had to decide which elements are essential and which are probably unnecessary. This is something that I still have in mind today. Is this element really adding something to the track? If the answer to that is no, or not sure, then it probably has to go.

Today I have much better equipment, I have outboard synths, compressors and equalizers, but I still tend to limit the number of stems I use to a minimum. My best tracks have less than 20 stems. If it gets too much or I get lost in the arrangement, something isn’t right. Then I start over or I put the project aside and come back to it later.

How are you coping with stress during the pandemic? And how do you manage shifting priorities or changing deadlines?

For me, the pandemic reduced the amount of stress that I have. With little to no gigs, I have much more time to focus on making music, which is a good thing on one hand. But I miss the inspiration I have from going out. So, sometimes I’m not using my free time as good as I should. It goes in waves from being very productive to being down and without energy.

Are you still based in Berlin? How has a city so well known for its night culture coped with having it largely taken away?

Yes, I live in Berlin since 2006 and still like it here although it is changing a lot in the last years. It has gotten much more expensive and crowded, it is losing its freedom and easy-going vibe but it is still a very liveable city. This year was, of course, special and the contrast from a ‘normal’ summer to 2020 was huge. Almost no festivals and proper parties were very odd and sad but complaining don’t help. The people tried to make the best out of it and still made the best out of it. Everything seemed slowed down and quieter which was probably also a healthy thing.

Are you finding more time to produce now that you’re not on the road?

When I’m in a productive phase I really use them to be creative. I am sometimes very inspired to make music, and I mean ‘real’ music without thinking what Dj might play this track, in which club this might work or what label might release this. I just create music for fun, like back when I started it. This is very refreshing for me. The whole business thing took away a lot of the fun at certain times, I feel relieved in a certain way.

How much are you missing playing live at the moment? Are there any elements in particular that are irreplaceable?

I miss it a lot. I played a couple of shows this summer and afterwards, I felt very energetic and my batteries were recharged again. Without playing live I feel down and also a little bit useless. I need feedback from the audience from time to time. It makes the whole thing worthwhile.

Your latest release on Dantze is great! For us it kinda sits between a few different sub-genres… how would you describe it?

I am pretty bad at fitting in genres and categorizing music. The last months, even before the lockdowns I was focusing more and more on the melodic side in my music. I used more synths and tried to make music that you could also just play on a piano. When I went home from the studio I always still had a melody playing in my head. So, if I had to put the Dantze release in a genre I would describe it as synth house. Is that a thing yet? If not I might have just invented it. Remember where you heard it first.

You’ve released with so many great labels. Do you make music with specific labels in mind?

I used to try to produce with certain labels in mind but this approach doesn’t really work for me. I end up in a totally different direction anyway so I better just make music for fun and see where it goes. Otherwise I end up copying something else which is something I try to avoid.

Any specific influences on inspiration behind it?

EKDK, a day in the life

My inspiration mostly comes from playing around and jamming. I start with a synth line and tweak it until I like it or until it bores me, then I delete it and move forward. When I am in an inspired mood I have this technique where I start new ideas, make a sketch, save it and move forward. I don’t spend time on equalizing too much and get lost in the details. I stay in the flow and just enjoy making music. The next days I come back to these sketches and ideas and decide which one is good enough to keep on working with it.

People haven’t been raving together properly for months now, so what purpose do you think ‘dance’ music can serve in these times?

Even without big raves, there is a need for dance music. You feel the energy from the music even sitting on the couch or driving in the car. There is also dancing in parks or living rooms. The purpose of the music is to move you inside and outside.

The purpose of the music is to move you inside and outside.

If the music industry should learn one thing from the coronavirus pandemic, what do you think that should be?

These are tough times for the music industry these days. We now learn the hard way that you can’t take anything for granted.

Finally, outside of dance music, which album have you listened to most this year?

At home I don’t listen to dance music too much. Three albums that come to mind are: 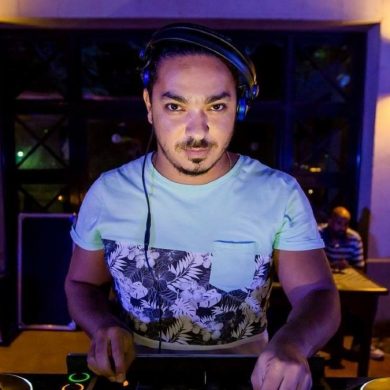