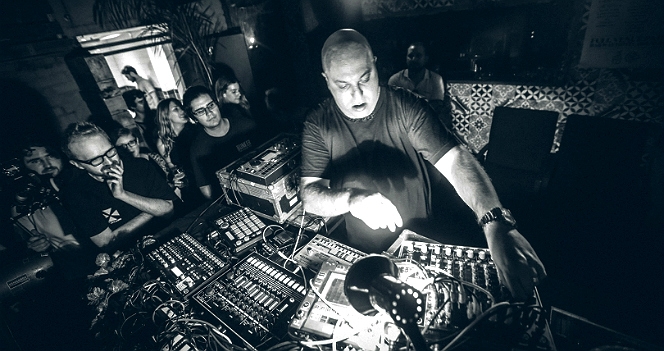 David Haberfeld aka Honeysmack is an Australian electronic dance music producer and live artist who has been at the forefront of the Australian house and techno scene since the 1990s. A passionate artist with a fierce dedication to all things acid, he’s as prolific as they come, and someone whose obsession with sound has even recently led to him embarking on a PHD in electronic music. Though an impressive feat, it;’s his recent work on Carl Cox’s fledgeling Awesome Soundwave which has really caught our ear. So, ahead of the release of his thoroughly captivating Post Acid LP, David kindly took some time out to discuss his home country of Australia, his recent studies and his live setup.

Hi David, thanks for taking the time to chat with us today. Let’s start by asking about Australia: how’s the mood at the country in the morning with all the bushfires going on?
I’m in the city and well away from the fires but there are days where thick smoke blankets the city, like a scene out of a post-apocalyptic sci-fi horror movie. It’s all very surreal and I think many people don’t actually know what to say.

We just read you’re currently in the middle of a PhD in electronic music. Can you tell us a bit about the course and what it all involves?
My research investigates what I’ve been doing for pretty much my entire adult life – how performing live electronic music informs how I make acid techno! It examines my real-time compositional practice over the years and how the TB303 has been an important part of my work. A PhD is a body of research and there’s no coursework as such considering it’s a postgraduate study.

As someone who’s obviously well versed already in live set ups etc, what are you hoping to learn from the course? Do you think you can always still learn more about hardware, for example?
The research helps to contribute to a growing area of academia in electronic dance music practices. There’s lots of socio-cultural research in the field, although electronic compositional practices that exist outside of traditional music practices has been steadily growing for a number of years, but here the focus is electronic dance music. Lots of people are making great electronic music without referring to antiquated music theory. Contemporary electronic dance music has emerged since the 1980s and its short history (in comparison to Western art music) we have seen an amazing amount of styles and genres that have been informed by certain instruments like Roland’s suite of synths and drum machines from the 1980s. These machines continue to impact the way we make electronic dance music, even though many were considered commercial failures as they were not entirely embraced by traditional musicians. Roland’s TB-303 and TR-909 continues to be the centre of how I make and perform. I love how these iconic machines have been cloned over and over again because each clone has a new quality that can be explored. For me, this is an adventure. I don’t view these machines as individual instruments, rather the studio is my instrument and every drum machine, synth, effects unit and mixer are modules that make up my instrument… now don’t get me started on modular synthesizers, I’m a serious eurocrack addict!

Just as Rock’n Roll found it’s instrument in the electric guitar, electronic dance music found it’s guitar in the form of the TB-303.

We read that you’re a producer, composer, performer, DJ, promoter and academic. How do you find time to do it all!?
Everything is connected in some way after all these years, segregating the different aspects of what I do can be difficult, perhaps the word ‘artist’ might be the simplest way to summarise it all without sounding too much like a wanker, or maybe the other way around?

Let’s chat a bit about your beginnings in electronic music. When did you first fall in love with electronic music and what was it about the sound and vibe that so appealed?
I love electricity and have loved it ever since I was able to operate a light switch. This was a long time ago, I must’ve still been shitting in my pants, way before cellular phones, social media hashtags and soy milk alternatives.

What DJs and producers really influenced you back then?
Being alive as a human being and walking this planet has always influenced what I do.

What excites you about working as a live act compared to say, DJing?
I have never described myself as a DJ (how boring). I feel there is a common misconception that automatically defaults all electronic dance music as the output and practice of a DJ. Those who have a better understanding know this is simply not true. Improvising live electronic dance music with hardware, where people can see and hear the music being created in front of them, I believe, offers more authentic entertainment than playback of preconstructed music. This makes for far more exciting and unique performances every time I perform – no two shows are alike! This also cultivates an original and genuine experience for each show, whereby audiences need to be there to experience the performance, given the improvisational approach I take. I’m not interested in a replication of tracks or songs (like a DJ), my live performances are a ‘moment in time’ – you were either there to experience or not.

Let’s chat a bit about your live setup. What does it consist of? Do you have a favourite piece of kit that tends to form the basis of most of your setup?
My live set-up changes for every performance. The Roland TR909 and TB303 have always been at the centre of what I do since I began, but these days I also incorporate a modular synth rack, that is forever changing in the configuration. The Octatrack is also a great live performance tool that can glue the past and present. The constant flux of gear and modules allows for a greater variety for each performance further making each performance different from the previous. The interchangeable nature of the gear and how I perform is further enhanced by not saving or recalling patches or sounds. 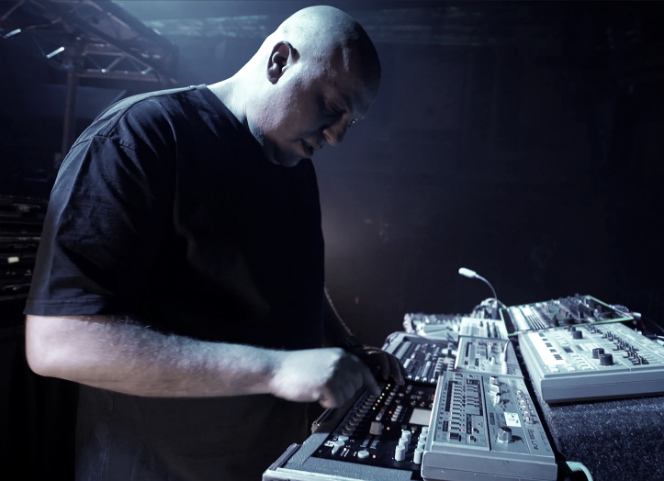 You’re most associated with an Acid sound. What is it about Acid that you really love? And what sort of acid-focused producers do you really look up to?
Acid and the sound of the 303 has an immediacy that can shake dancefloors. Just as Rock’n Roll found it’s instrument in the electric guitar, electronic dance music found it’s guitar in the form of the TB-303.

Can you tell us a bit about Australia’s electronic music scene and your involvement in it?
I’ve always resided around the periphery of the scene, as I came from a punk background and tended to question mediocrity and didn’t align to the scene for many reasons. As the scene grew through the 1990s and now a huge part of popular culture, there’s an appreciation for how I’ve contributed after all this time. But honestly, I’ve always challenged the scene, it keeps things interesting (for me at least)! I’m always interested in pushing the parameters of style and genre.

The new album is coming soon via Carl Cox’s Awesome Soundwave, which we gather is a really huge honour for you! How did it come to pass?
I was contacted when the label was being formed by Chris Coe (who runs the label) who has been a close friend of mine for well over 20 years. He said the label was focused on live artists and was told I’d be a natural fit, so yes was only too happy to oblige! Given the nature of how I compose through a performance approach, I sent Awesome Soundwave some long studio jams as examples of what I was doing at the time. Chris was into it and wanted me to record at their studio. Considering tracks exist as moments in time, I don’t use a computer to compose or arrange, they are all performances recorded to tape. Chris suggested I come to the studio and jam out some new stuff exclusive for Awesome Soundwave. So that’s what we did – I took a bunch of gear to El Rancho and for 2 days straight we recorded me jamming my gear. After the recording session, we extracted the best bits as complete sections to form tracks for the album.

Considering tracks exist as moments in time, I don’t use a computer to compose or arrange, they are all performances recorded to tape.

We read that you were once known as a hardcore and gabber DJ, playing as DJ Speedball. How do you look back on those times? Is there anything you’d do differently?
Wow, someone did their research! Yes, this was one of my first monikers, I was right into Gabber in the early 1990s during the same time I was a writer for a music paper where I would constantly get these promo Gabber records, so it was only fitting to go out and play these tracks. I saw it as progression of punk. There weren’t many places to do this, but DJing 180 BPM records taught me a few things. Funny enough DJing became rather boring and moved on from DJing Gabber to performing live Acid.

I saw gabber as a progression of punk. There weren’t many places to do this, but DJing 180 BPM records taught me a few things.

And you also supported Britney Spears once?! Whose wide idea was that? Did you expect it to be something of a car crash way in advance?
Absolute fucking hysterical! I was signed to the same label as Britney around 2000. And she was heading to Australia to promote her movie Crossroads whereby she was going to perform just a few songs to her fans at Fox Studios in Sydney for free! The label thought it would be a good idea for me to support her, but I said it would be horrible, but the label insisted. So there I am, a live Acid Techno artist about to perform abrasive Acid Bangers to thousands of prepubescent girls screaming for Britney. How did it go down? It went over like a lead balloon! Although I got to meet Britney who was lovely!