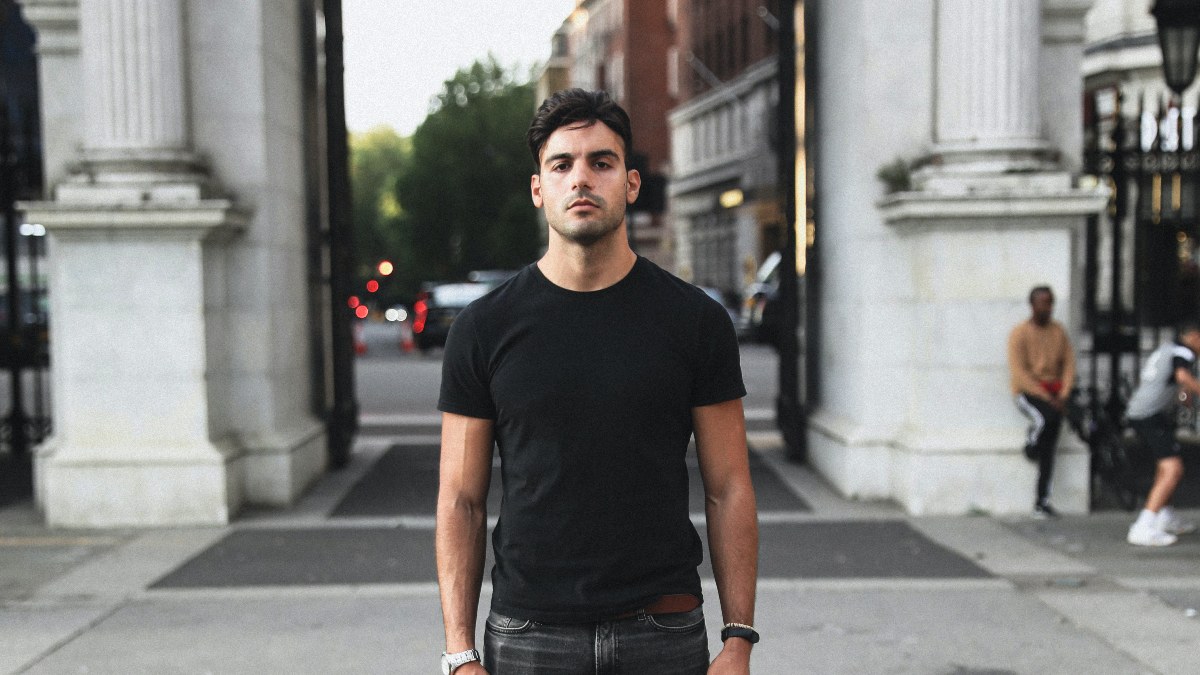 Born in Marrakech, Jalal Ramdani embodies the essence of tribal and afro sounds. He grew up in an atmosphere of Amazigh and African rhythms that he is authentically overlaying on house music. Armed with a plethora of folkloric percussive instruments, along with soul-awakening vocals recorded in various areas in Africa, he is currently spraying the afro house scene with tracks that are continuously supported by the likes of FNX Omar, Roger Sanchez, Kintar and The Deepshakerz. Labels that signed his tracks include Connected Frontline, Sudam, Seres Producoes and SafeMusic.

Jalal Ramdani took the time for the nice interview below. Check out what he had to say.

Hey hey, how are you doing these days?

Very good. I just came back from Paris to finish off a collaboration with Nicolas Sasson. Yesterday Kintar, the owner of Sudam Recordings, confirmed he will sign the 3-track EP that I made with Darksidevinyl. And I’ve just received the artwork for my next collab with The Deepshakerz on Go Deeva!

Reading your bio shows you are quite a versatile person. Shifting from quant trader to producer. What a shift! Explain.

I didn’t make the shift yet, I’m still a quant trader. After finishing high school in Morocco, I went to France, starting with 2 years of Classes Preparatoires in maths and physics. After that a French engineering school majoring in Financial Engineering and a masters in Quantitative Finance. It was technical and time-consuming, but that’s what allowed me to work in hedge funds/investment banks here in London.

I’ve been interested in music since my childhood as a listener. My first encounter with electronic music was around 2008/09 with Ian Carey’s “Hesitate” and “Leave The World Behind” from Swedish House Mafia x Laidback Luke. But it’s only around 2018 that I started thinking about producing music, which was actually materialised early Fall 2019 when I discovered Afro-house in Scorpios Mykonos: that was the defining moment when I firmly decided to learn how to make music and go the route of a freshly trending genre that is afro/tribal house. It was FNX Omar’s remix of “Kuar” that made me plunge into music production. I loved the fusion between house music and African percussive elements (Djembe, shakers, bongos) along with ethnic instruments and vocals. Coming from Marrakech which is rich in folkloric music, I thought that’s where I’d have the best edge.

One year later, I now have releases on Connected Frontline, Sudam, Seres Producoes, Safe, and an upcoming track on Go Deeva. I also have an upcoming track “Imbongi” with Mr Silk featuring Africa’s majestic afro vocalist Lizwi, with remixes by the 2 afro heavyweights: Enoo Napa and FNX Omar. The label will be unveiled soon.

Maybe tell our readers where are you from and what do you find inspirational about where you’re living?

I’m from the Moroccan Red City, Marrakech, full of palms and embankments made of clay! It’s a city made of rhythm, in every other street you will find a small group of street musicians chanting and playing with ancestral Moroccan instruments that you rarely find elsewhere (Rebab, Lotar for example). They spray their music all over hoping to get donations from seduced pedestrians. That in itself is an immense inspiration: not only the music they make is beautiful, but also technically complete and close to flawless. One guy handles percussion with instruments and with feet stomps, another sings while playing string instruments and the lady brings in her vocals with a rhythmical dance.

What about your childhood was unique and most contributed to the adult/artist you’ve become?

It’s a profound question which pushes me to dig deep in my memory. The music I was exposed to as a kid was:

I specialize in Afro-house music. In itself, there are many subgenres, ranging from the most folkloric/world music to the progressive/melodic side of it. I have started producing less than a year ago so I’m still experimenting with these variations. I’ve made 13 tracks now, 5 of which are already released and the 8 others will be soon.

I take the best from each world and give it its own space in the track.

I always try to give my tracks a feeling of ardour and/or joy, and not sadness/dreaminess (that can be partly achieved by targeting specific root keys). My music is rich in percussion mainly from Africa (but also Latin America, India etc..), native and organic instruments, powerful vocals (I’ve worked with Lizwi, Ahmed Sosso and Mel D so far) and of course an electronic overlay consisting of synths and some orchestral elements. I take the best from each world and give it its own space in the track.

What kind of music did you listen to growing up, and does it have any influence on your current sound?

Until I was 14-15 years old I was mainly into classical/orchestral music (Chopin, Liszt, Beethoven, Badelt, Zimmer), then I had a rap and rock period until 18 (50 Cent, Linkin Park), followed by progressive house. There was also of course a lot of Moroccan folkloric music revolving around since I was a kid. I think the impact that these musical genres had on me is training my ear to recognize patterns, instruments, moods, rhythms quickly and accurately, therefore allowing me to have an ear good enough to create melodies and sounds that make sense phonetically.

For most artists, originality is first preceded by a phase of learning and, often, emulating others. What was this like for you? How would you describe your own development as an artist and the transition towards your own voice? What is the relationship between copying, learning and your own creativity?

Everybody starts somewhere. From the genius classical music composer to the maestro electronic music producer. A signature sound is a craft that is perfected over time. It will take more/less time for each person depending on how fast they learn, their initial skill level, at what age they started, how much time they have for it, how consistent they are etc.

When I was starting I paid attention to every track I listen to, to distinguish between all the instruments it has, with which frequencies and stereo image etc. A good fisherman can recognize the fish breed just by a bare look, a good music producer should thrive to have the same level of analysis just by a bare listen. I often have 3-4 reference tracks when I’m making a new one, essentially to get the grooviness level right (chilled track vs energetic vs closing etc.)

Through time I notice that there are some sounds and rhythms that I tend to use more often and I believe that’s what is currently building to form what will be my signature sound. There is this folkloric and joyful feeling that I saw recurring in 4 of my tracks (Meyla, Sidi and the upcoming Mimouna and Ossoumbara). It could potentially become my own voice but it’s probably early to say because I also like to make tense/fervent tracks.

When working on music is the dance floor always something you keep in mind? Or does a certain vibe or flow sometimes transcend that?

Technically speaking, the dance floor is always in mind, particularly when making the low end of a track, and even more so the sub-bass, around 70 Hertz and below. Not many studio monitors are able to generate sound below 40-50Hz and you need a subwoofer to hear sounds down to 20Hz. The human ear cannot hear anything below 20Hz, but their vibrations can be felt in clubs. So this section of sounds below 70Hz needs to be dealt with carefully in the studio to produce the best results in clubs.

On a vibe level, I try to make tracks that can reach the widest audience possible. However, targeting the highest amount of moods is harder, for example. It’s not obvious to make a track that can be both played at peak energy in the club and also that can be listened to at a chilled house party at home.

Tell us about your recent release, “Santa”. How did this one come together?

It was such an expected track that really came out of nowhere. End of June, my friend Mido (Darksidevinyl) wrote to me “Bro, if you have a new Afro idea send me we can work on something”. I was working on “Imbongi” at the time, but I took a 1-day break to make a 6min track for Darksidevinyl with a clear idea of the track. He listened and replied, “Bro, sounds great I like what you did send me the full stems”. So, I sent them, he added his groovy/energetic touch and sent me back the track the next day. I retouched the vocals again and a bit of the Oud/plucks. He then mixed and mastered it. In exactly 3 days we had a track ready to be sent to labels. He sent it to Connected Frontline, 2-3 days later they signed it and it got released on 25th September. I really enjoy working with Darksidevinyl because we understand each other in terms of speed, quality and also the contribution of each of us in each track.

In the subsequent month, we made 3 other tracks that just got signed by Sudam.

What is one thing that would make your musical career more successful? Where do we see Jalal Ramdani in 5 years from now?

Well, getting out of the Covid era would be an immense push to start with. I started to produce late 2019, and my tracks started to get signed early 2020, spot on the lockdown, great timing eh?  I had a huge gig lined up with Enoo Napa and Mr Silk in March but it was postponed. Now that my tracks are signed on the world’s best afro house labels after such a short period of time, I need to start touring in different cities so that my music spreads further. Meeting face to face other DJs/producers/club owners will also contribute.

In 5 years, I anticipate the afro house scene to have exploded and become one of the most in demand genres worldwide.

In 5 years, I anticipate the Afro-house scene to have exploded and become one of the most in-demand genres worldwide. I will most likely have released around 50-60 house tracks. I will have been in the top 100 best afro house producers for the preceding 2-3 years, with many tracks reaching the top 10 and a few top 1. I’ll have played in 2 or 3 editions of Miami Music Week, Esto Es Tulum, Ibiza seasons (hopefully at Hi Ibiza alongside Black Coffee and Da Capo). Maybe even an appearance in Ultra Miami 2025 and Tomorrowland 2025? I will work and fight for it. This is how I picture the coming 5 years.