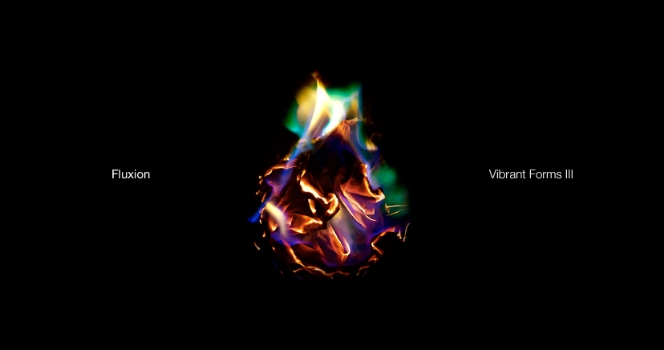 Fluxion is a project by Konstantinos Soublis who has been releasing his productions since 1998. He is still very much alive and his so long awaited Vibrant Forms III, the latest part of a trilogy that commenced in the year 2000, has been released. On this album he seeks to reconnect with the liberal attitudes and experimentation of the likes of Steve Reich and Philip Glass that paradoxically have given structure to much of today’s rigid club sounds.

We caught up with Fluxion to have a chat about his career thus far and of course his latest release Vibrant Forms III.

Konstantinos, thanks for your time and answering some of our questions.

You are around for some time now. Please tell our younger audience a bit about yourself.
I am a music artist & producer. I started having an interest in electronic music from the age of 18-19. Before that I was listening and
paying attention a lot to score music, which had in some cases a fair share of use of electronic means, or an interesting recording of instruments. Then at college in the UK, I came in touch with the underground electronic music culture. So studying in the UK in the 90’s was where I first had access to great electronic music, of no one sub-gender.

I’ve released my first record in 1998 on Chain Reaction, and haven’t stopped writing and producing ever since.

When and how did you first get involved with (electronic) music?
I had started experimenting with composition using a piano and later a synthesizer from an early age. I had built up my first set up when I was 19, and being exposed to all this new music coming out in the 90’s, made me want to try out things. When I started recording, my influences were varied: ambient, score, techno, dub, and I wanted to incorporate all those into my music. At the beginning I started recording 30 to 60-minute sessions, totally improvisational passages and motifs over repetitive beats. Then, as my technique was getting better, and I was able to know what to ask from my equipment, I started using them in unorthodox ways to get interesting results.

What or who were your influences?
Composers like Ennio Morricone, Wim Mertens, Steve Reich, Arvo Part, Philip Glass, Maurice Jarre, the early period of Howard Shore, Brian Eno, John Cage were my initial influences. Then electronic music from the UK and the German minimalist movement. Music that was coming out from the UK was to me more daring in the composition,while Germans were more focused on production. So living in London during the first half of the 90’s, and then between Berlin and Athens on the second half, I think I was exposed to important shifts in music.

It must have been a big change over the decades. What is in your opinion the biggest change in the music industry. Business-wise, technology-wise, …?
Some key differences. More accessibility to the music making process … once a benefit of fewer people. More music out there. More artists. More releases.Everything is more … all in less volumes.

Another change is that now the majority of artists cannot support their lives from record sales without having to be on the road. Therefore this has shifted the concept of the recording artist and pushed him more towards performing artist. This key difference I think has altered the intention, as more people now produce music in order to perform. I think everything is targeting towards the live aspect. Also the fact that due to the overexposure of the information we get, we are all suffering from an attention span disorder syndrome, to one extent or the other using the net. We are all flicking through, we are not listening.We are checking out. This has been a major change as albums which were once listened to as a whole, are now being streamed out of context.

Is there anything you would like to see differently? And what would be your approach to change it?
No, there is a reason for everything.

Music wise you did some pretty nice things. Back in 1999 you released ‘Vibrant Forms’. A highly anticipated LP. Tell us something about it. How did you come to create the album?
The connection that I was seeking is one that allows the listener the space to fill in parts in his mind. This will allow him/her to be able to listen to the same piece of music differently the next time around, being in a different state. Or between two people, it differs. That’s what I like as a listener.

Revisiting, to give me something additional or different, between listens. So when the first material shaped up, and worked over repetitive listens over a period, giving me a different angle each time, was the moment that I felt I had something interesting in my hands.

Not long after, one year to be precise you made ‘Vibrant Forms II’. What was the reason for this? Was the first version not finished? Or was it in need of a sequel?
The Vibrant Forms to me is a mindset. It’s a way of writing, producing, thinking and executing. I felt that there was more to say and I recorded VF II. I had realized that after the completion of the first one.

Some say the second edition is a timeless dub-techno release. What made it so special according to you?
I don’t know about timeless, but they still sound good to me. I believe the reason for that and the key element, is that they don’t have obvious sonic reference points. Those that define periods. On this project, all my influences and interests, sound design, techno, ambient, dub, found their way and worked together, not against each other. It was the balancing of the mixes too. I think what made it special for me, was those contradictory elements of calm, but fast, or fast but like in slow motion due to sound design or long motif cycles. This gave me a sense of exploration during the process, not really knowing what will happen next.

Somewhere in the beginning of this year, ‘Vibrant Forms II’ got remastered. Why the need, after such a long period. Did you wanted to give it another push with a fresher sound?
I have been suggested to re-issue it, and since it hasn’t been available for more than 10 years I thought it was a good idea. I wanted it to be available and re-mastered for a newer generation of listeners.

And if things aren’t Vibrant enough, there is ‘Vibrant III’. All spatial and ambient sounds. Tell us all about it?
Vibrant Forms III is a continuation from the other two albums. Even after the completion of Vibrant Forms II, I felt that there was some more “digging” to be made. I left it aside to move on to other conceptual albums, and when the time was right, I started working on some new ideas, motifs, that led to Vibrant Forms III. The way of working and the compositional method is in direct link with the previous two albums. It was always about the process, and how momentary decisions can give birth to new ideas. Those albums as a whole share the same philosophy. My approach on this album is more about motifs, processing, and accidents that shape the songs, or rather define it.

What do you expect from this release?
Not expecting something. Getting so much support and acknowledgment from people and artists is the best feeling.

What’s the magic trick to come up with all these sublime tracks?
Staying true to your art and to yourself. If that happens, you’ll stay true and honest to your audience.

If not music, what would the alternate chosen career be for you?
I studied briefly photography, and like taking shots, so maybe photography.

Thank you so much. It’s been an honor.
The pleasure is all mine. Thank you.