For the 8th episode of Tanzgemeinschaft I present to you the amazing Karoliina. Karoliina is a Finnish DJ that I immediately got fascinated by when I heard her deep and mysterious storytelling sets for the first time. / EILLOM

Originally of Finnish descent and later migrating to Berlin and currently living in The Hague, Karoliina’s sets are influenced by the places and the people she’s surrounded by. Navigating stages from the Finnish underground to festivals like Flow Festival and Kosmos (FI), and to clubs like KitKat (Berlin) and Het Magazijn (the Hague) to hosting her own online radio show in Sri Lanka, she is no stranger to the electronic music scene. Given her fascination with the deep and obscure dimensions of the mind and the transcendental power of sound to take us there, Karoliina’s sets are first and foremost a form of musical storytelling. Painting a deep and mystical, emotionally loaded yet danceable soundscape, Karoliina blends the borders of electronic music by flirting with a rich variety of genres, providing a full mind-body-soul experience on the dancefloor and beyond.

Hi Karoliina! Where are you from and what do you find inspirational about where you’re living?

I originally come from Finland where I’ve lived in four different cities, most recently in Helsinki. Since 2015 I’ve been mostly abroad, living for shorter periods in Berlin and Amsterdam but mostly in The Hague where I’m currently finishing my degree in graphic design. So I guess what I find most inspiring about The Hague is that thanks to this city I’ve been able to pursue my dream of a creative career and meet so many inspiring people. Through the development of my artistic practice I have also gained a lot of insight for DJing. For me, creativity is not medium-dependant — music, visual arts, film-making, drawing, writing and creating digital 3D worlds are all things that I enjoy.

All the different outlets of creativity enrich one another and deep down they are all the same since they come from within me.

When did you start DJing – and what or who were your early passions and influences?

I released my first mixtape in 2016, and in 2017 I released my first guest mix and played my first small gigs in Helsinki. I had been a fan of electronic music for long, but I think the obsession really started in 2013 after I visited the Kazantip Festival in Ukraine. I still remember dancing in the Black Sea surrounded by otherworldly medusas and beautiful strangers, feeling the bass vibrating in my body and thinking to myself that this must be the most perfect moment I’ve ever experienced in my life. Also the year 2015 I spent in Berlin was highly influential in terms of music. There, I fell in love with the club KaterBlau and especially its slower dancefloor Acid Bogen. Through KaterBlau I discovered Garbicz Festival, where I ended up going every year since then. Through there I discovered my love for deep, organic and spiritual sounds. Although my taste in music has expanded since then, I still hold these influences close to my heart.

I still remember dancing in the Black Sea surrounded by otherworldly medusas and beautiful strangers, feeling the bass vibrating in my body and thinking to myself that this must be the most perfect moment I’ve ever experienced in my life.

What are your favorite spot to head to in Helsinki before a night out?

Since Finland is so high up in North, the only chance to spend time outside is in the summer, and this is also when Finnish people go mad about partying. During this time the whole city is full of open airs, illegal raves, underground parties and spontaneous gatherings. It feels like a year’s worth of parties is squeezed into those three short summer months between June and August. I would just wander aimlessly around the town with my friends and end up somewhere spontaneously. During the winter I would gather at a friend’s house for a pre-party or go to one of the bars in Kallio, such as Siltanen or Om’pu.

Tell us about the best sound system / your favorite club in Helsinki?

Actually, my favourite club in Helsinki is not active anymore. It was a small underground place next to a bigger club called Ääniwalli, in a building where I also used to have a temporary studio. They hosted the most amazing, sweaty parties in a steamy, intimate environment. Their lineup would offer a much-needed alternative for the more mainstream techno clubs in Helsinki. They would often book artists that we’re very well known in places like KaterBlau or Sisyphos in Berlin, but who didn’t fit the more straightforward techno preference of the bigger clubs in Helsinki. Besides that place, I’ve recently enjoyed going to a relatively new club called Post Bar which is run by a new generation of DJs and producers. I very much appreciate their lineups that offer an interesting catering of fresh, cutting-edge DJs playing contemporary sounds from around the world, pushing the electronic music scene further. In 2018 they hosted Mad Miran, who is my local favourite from the Netherlands.

Which 2 tracks ultimately are the favorites of your life? Please explain for each of the tracks why they had an impact on you.

Dominik Eulberg – Noch ein Bass im Ärmel (Original Mix): With its high emotional charge and a mind-bending build-up, this track somehow summarizes my earliest memories of losing myself completely on the dancefloor, when dancing becomes more like therapy for the mind and the body.

Anouar Brahem – Conte De L’Incroyable Amour: Non-electronic music and the sound of analog instruments has always been a big part of the music I love. This track in all its magical simplicity is just the most hauntingly beautiful and elegant track I have ever heard. The high pitched flutes in the end of the track just speak directly to my soul.

How do you usually prepare for a gig? Are you practicing/setting a vibe/choosing tracks at home, or are you doing this ”in the moment” while playing at an event? Do you get to be spontaneous?

For me it really depends on what kind of a gig I’m playing. If it’s a bigger festival, then I prepare a gig more like one would prepare a concert. Then, I like to have full control of the storyline and experience I’m putting out there. When it’s a more casual party like a club night or an open air I like to leave some room for improvisation.

For me improvisation and pre-selecting tracks are two slightly different forms of DJing, both having their pros and cons.

With improvisation, I get to experience the thrill of reading the atmosphere of the space and the people. Spontaneity in live performances offers an ecstatic experience of oneness with the crowd where energies and emotions are being exchanged between me and the audience, both influencing one another. With pre-selecting tracks, DJing becomes more like film-making, where one creates a narrative by sequencing sounds like scenes to best deliver the story and the emotional atmosphere. Preplanned mixes become like a personal musical diary, depicting whatever you were going through in your life while making the mix, which can be very therapeutic to look back to. That was basically the reason I started DJing — I always had a huge need to tell stories and to understand and process my own emotions through music. I was often border-line embarrassed of publishing some of the mixes that felt emotionally extremely personal, but funnily enough, those were often the mixes that became the biggest hits. Getting messages from fans telling how a mix helped them get through their own emotions is the best feeling in the world! Through that process, I really learned that the best work comes when you dare to put your heart in it, no matter how vulnerable it eventually makes you feel.

I always had a huge need to tell stories and to understand and process my own emotions through music.

What exciting news do you have in the works for the coming months?

I will be graduating from the art academy next summer and I really hope to get my first steps in music production by then. It would be amazing to create work where I could combine my love for music, visual arts and film-making. So hopefully in the not-so-distant future you can also hear my own tracks and not only DJ sets! I also have an online event coming up just before New Year’s eve where visual artists collaborate with musicians and DJs to create an audiovisual experience.

What can we expect from the mix you made for Tanzgemeinschaft?

I always like to work around a specific theme or message when creating a mix. In this mix I contemplate on how technology and capitalist lifestyle affects our lives, often making us feel powerless or melancholic when faced with things like climate change, mass extinction and global pandemics — all of which could’ve been prevented without human greed. At the same time, it’s also a dreamy, hopeful ode for a better tomorrow with more empathy, love and understanding. Since Corona has made clubbing impossible I’ve drifted towards more sensual, deeper and dubbier sounds which you will hear throughout the mix, ranging from old to new favourites in that field. Hopefully, it will offer some solace for anyone feeling a bit overwhelmed by these crazy times we’re living in! 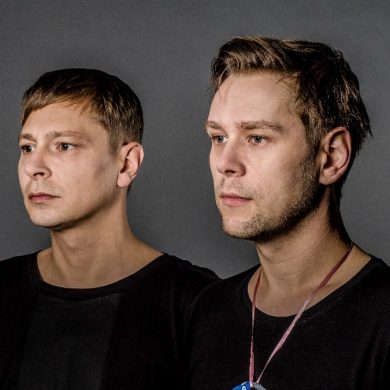