Adaptation Theory was the debut album released by Swiss techno producer UFO Over, and followed an intense period of research and experimentation with futuristic musical visions. Now under his alias Raimond Ford he has delivered fresh  and frenetic reimaginings of four of the cuts from the LP.

Released in 2020, UFO Over’s album Adaptation Theory started life as several live  performances performed outside of the club environment, later honed and perfected after many hours in the studio. An artist who thrives on pushing himself and redefining how he approaches production, the result was a hypnotic and deeply engrossing album that moved from shifting ambient to dark, polyrhythmic techno and melodic electronica. Now under his Raimond Ford alias come four new remixes that pulls us firmly back to the depths of the dancefloor

Thanks for talking to us today, Luca – please tell us where you are currently based, and how your year has been so far?

I am currently at home in Lugano, Switzerland. Despite the obvious difficulties in the industry, it has started well: keeping me motivated are several creative cultural projects that I should be able to develop by the summer. I am also working on music for a multidisciplinary project that I hope will be presented next year in a planetarium.

You’ve been making music and involved in the industry for many years now… can you briefly talk us through some of your highlights from your career so far?

I’m very happy to talk about it even if it is difficult to tell you everything that music has given me over my 30 year career.

A moment that I will never forget is the discovery of the “legal” rave movement in Zurich back in 1993 which I was part for over a decade. A truly incredible scene, made of a peaceful audience, disused industrial locations and impressive sound and laser show systems. Among the raves parties and clubs of the ’90s that will remain forever in my heart I remember with pleasure those such as Energy, Cubik, Evolution, Futurescope or nightclubs like Alcatraz, Rohstofflager or Matrix Club in Zurich, or even Cocoricò in Riccione or Rex Club in Paris; or the first editions of the Street Parade or the Love Parade.

Another moment that somehow allowed me to change and evolve was when, upon my return to the clubs around 2005 after a few years of absence, I discovered that turntables had practically disappeared from radios and clubs.

A milestone that marked my career was being able to produce my own music in a few square meters, making the most of the few means available. I willingly put myself out there to encourage and support artists in my region to embrace the life of an artist thanks to our radio show PUSH THE TEMPO on RSI_ReteTre. And although the expectations are in my opinion higher now, the world is far more interconnected, so I think the possibilities for an artist’s career have increased.

You must have seen so many changes over the last few decades in the industry, but is there any change more than others that stands out as especially profound?

As a native “analog” artist I was sorry to lose part of the relationship with vinyl, which was my main tool. Not only being able to play it in clubs but also the continuous discovery of artists and labels and the collecting aspect. Record stores have always been some of my favourite places and I miss them a lot, even if I don’t really have to space to increase my collection. One very positive thing I’ve noticed is the increased openness and inclusion everywhere in the world. However, with a bit of nostalgia I miss the clubs with only one dancefloor where you could play anything and create an authentic relationship with the audience. I still remember a couple of parties in my region where artists like Adam Beyer & Lenk, DJ Misjah or Jeff Mill played parties like this.

Last year you released your debut album as UFO Over. This was definitely not a ‘club’ album… was the lack of DJing and clubs being open a factor in you deciding to produce this kind of music?

It’s actually only in this “third youth” of mine that I have felt the need to make albums. Although I released in the 90s a hundred records under various individual and group aliases, I had never thought of doing something more challenging and also disconnected from the club world.

“Adaptation Theory” has a slightly different story compared to albums I released under different aliases like Flood by Artiglio or Robots Can’t by Raimond Ford, and contains a lot of performances made at experimental festivals, at alternative installations or even meditated at the top of some peak like the song Ama-No made in CarÌ at 2280 meters high. This happened a bit earlier before the current pandemic and indirectly prepared me to live and face this situation better.

On your new release you’re using another alias of yours, Raimond Ford, for the remixes. Can you tell us about what defines these two aliases for you?

I’ve always been a geek, I’ve never liked in productions to mix aliases and musical genres. At one point in the past I was so busy that to appear less so I would print records with different names.

The difference between UFO Over and Raimond Ford is conceptual as well as musical.

The difference between UFO Over and Raimond Ford is conceptual as well as musical. UFO Over is a project of 2014 born to explore the discomforts and unexplained facts of my territory, musically able to capture the surrounding environment and mix more sounds such as classical and electronic. Raimond Ford was born in the nineties to propose only techno music in parallel to DJLukas with whom I had gone to play hard and industrial music, so essentially dancefloor-focussed material.

The remix EP is amazing – really intricate but quite full on techno. How has it been not being able to play this in a club for people?

This is a very good question. Friends, audience and performance adrenaline I miss a lot and I still don’t know how long I will be able to last without it. At the beginning of my DJ career in the 90s I always tested and played my creations, and used to create acetates in Milan a few kilometres from home. When I made the Robots Can’t album I tested it with satisfaction in Lugano’s last historic venue the Living Room, and I still remember those moments well. What I’m looking for are those moments those emotions: the rest takes a back seat.

“Adaptation Theory Remixes” is for sale on Beatport. Check it out.

What role do you think ‘dance’ music has played in a year of not being able to dance with other people?

The people of the night are a big family for me, so let’s just say that many of them have taken a break to do other things and recharge their batteries. I have friends who are now a little resigned after 1 year without clubs and entertainment, others who are always active and attentive and follow artists and music on social networks. Others come together just to talk and have a drink together. Unfortunately for an artist to shorten the distance in this context with his audience is not easy: the use of cultural content at a distance is not immediate and is not as suitable as perhaps other forms of art.

Are there any other aliases you’re currently recording under?

Yes, in addition to those already mentioned I also use Bergsteiger and the project duo Backlight Collective together with my friend Alogique.

How have you stayed connected with your fans and contemporaries over the past year?

Although I’m not a digital native I have kept in touch through the music published and with my social channels. Fortunately by conducting with my partner Alevì the fourth season of our radio show titled “Push The Tempo” for the ReteTre _ Radiotelevisione svizzera di lingua italiana, at least once a month I was able to stay close and entertain Saturday night audiences.

Was live streaming and social media something you engaged in a lot?

No, very little. If I were to do this in the future for some special occasion I would do it to present my own music. At the end of March I hope to be able to return to perform on top of some peaks or on the shores of our lake and therefore to be able to share moments of music and nature with all of you.

What else do you have coming up this year that we should be looking out for?

Like many of my friends who have thrown themselves into video game music, I have given myself 2 special goals for 2021. The first as briefly indicated is linked to a multidisciplinary project for a planetarium. I can only anticipate that it will involve electronic music inspired by space a French pianist and a story for children drawn by Stefania a very young cartoonist. The second is to be able to deepen my knowledge and experience in music composition with artificial intelligence maybe presented something coupled with machine learning to the local public. Thinking about the dancefloor, one last thing I hope by the end of 2021 to have a new Anthology Of Techno party. 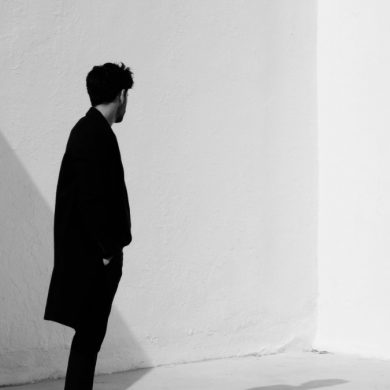 In conversation with The Alexsander