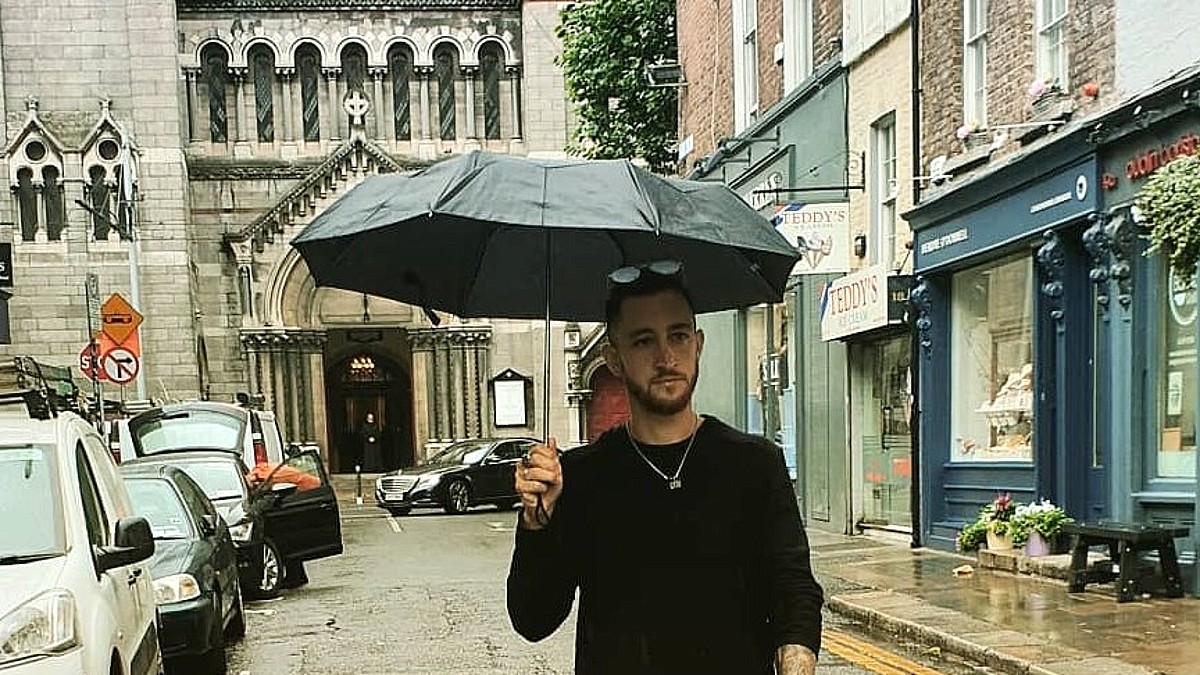 Dreamy, thought inducing electronica has long been the modus operandi of Behrouz’s always excellent Do Not Sit on The Furniture, but few artists encapsulate this vibe like Bodaishin. A fledgeling producer who sounds as though he’s been doing his thing for some time, his debut album (released via Do Not it) is called El Valle De Kadisha and speaks of a producer who’s really beginning to find his feet. An LP that really wears its heart on its sleeve, it’s very much the sound of a producer baring his soul to the world. A joyous and magnificent listen, it also gave us an excuse to check in with him recently to find out more. Hopefully, you enjoy this engaging conversation with Bodaishin as much as we did compile it.

How was your Christmas and New Year? Did you celebrate?

Well, this year I was lucky to celebrate it with the family. At Christmas we went to the countryside, far from the city, to enjoy nature for a few days. New Years was a little weirder. I had many reasons to toast, but the present time did not allow me to be entirely happy celebrating. It was a year of great uncertainty, many families lost their loved ones, the truth is that it cost me to celebrate it.

What was the most important lessons and take away from last year and the pandemic?

In particular, because of the situation I was in. I was able to really see the important things in life such as thanking and appreciating having a plate of food and a place where I can sleep and not get cold. I think this pandemic was a reality check to the world. Economic, social, and psychological.

On the one hand, I am very happy because the world needed a break, nature and society needed it too. On the other hand, the losses, deaths, and the increase in poverty make me sad. I believe that the most important lesson that this pandemic leaves us is to try to live our lives in gratitude, valuing how little (or much) we have since we never know when we will stop having it. Everything in life is ephemeral, and the pandemic, at some point, will pass.

Have you still been buying new club music ready for when you can play again?

Today, I am lucky to receive a lot of music from major labels, which have high-quality music. I have many producer friends who send me their promos. But I always like to search for more underground music, from artists who are not so well known, which is why I am always in that search. Beyond the club, I need to always be updated for my monthly podcasts.

Tell us about the El Valle De Kadisha valley – what it means to you and why it inspired this record?

The truth is that for me this is a dream come true, I did not expect it to happen so soon! The Kadisha Valley is a representation of one of the most beautiful valleys in Andorra, more precisely the Arinsal Valley.

The first song “Rumaki” was born there, where we worked together with Agnnih. Then he continued with another collaboration with Izhy, called “Autem”. I quote these first two songs since together with these 2 producers and friends we decided to isolate ourselves for several months at more than 2000 meters high, between the mountains. We went in search of new inspirations, to achieve a musical synergy among all. When I felt so comfortable working as a team, I decided to add my colleague Bohem to the project, who is in the same place as us and in the same search.

In the middle of the process we had to live the beginning of the global pandemic, so I decided to continue working remotely. I worked with Alvaro Suarez, a Spanish producer whom I admire a lot, and with Phoesy, a Mexican producer with interesting conditions. They are people and artists with whom I share a philosophy of life and a similar sound, which is why it is very easy for us to connect from the first moment. My original songs went perfectly with the collaborations. The proposal of this sound has many mixed feelings. Going through different states from melancholy, struggle, strength, mystery, uncertainty, darkness until reaching a place where we can feel at ease, calm, confident, serene, and happy.

Bodaishin’s El Valle De Kadisha LP is out now via Do Not Sit On The Furniture Recordings. Buy/listen to the release here and keep up with Bodaishin on Facebook .

All of this was the process that I went through in this experience in the midst of a global pandemic. I think it represents what we all live and are living. We are all living in The Valley of Kadisha in some way, we all seek the light, we all seek to solve the mystery of life. It was a long and hard process, but fun. There is nothing more beautiful than being able to express ourselves through music.

Luckily there are people like Behrouz, with whom I was in constant contact during the pandemic. He offered me his house with all the humility that a human being can have, to be able to make my music known to the world. That is why I entrusted him with these 9 stories, which for me are sacred. Together we decided to release the Album by Do Not Sit, which will be the first in the history of this important record label, and the truth is that we could not have found a better home for this Album.

How did you write the record – tracks in order, or did you experiment first and edit recording sessions or was there a big plan for it all from the start?

As I said before, everything was flowing with the passing of the months. I was always clear about the sound I was looking for. It occurred in parallel to an interpersonal search similar to the album, so I only have to put those feelings into music. Then, listening to various tracks, I realized that I had created a continuous story, and from there I decided to continue writing the full story. There were sessions of recordings of textures, organic sounds such as the noise of a campfire, natural noises from the Valley where I was living, among others.

Tell us about coming up in Argentina and then moving to Barcelona – what took you there, what are the similarities and differences between the two places?

I have been travelling since 2015. First for a matter of personal goals and desires, and then for professional reasons. My last return to Argentina was for health issues, which I decided to continue solving in another country. That’s when I moved to Andorra, where the Album was born. Then I moved to Barcelona where I am already a resident.

In 2 years, if everything goes well, I am already a Spanish citizen. From the first day I set foot in Europe, I was totally in love. Due to a question of language and similarity with my country, I was leaning towards Spain, where I had the opportunity to start applying for citizenship.

In Barcelona, I see many similarities with Buenos Aires. It is a city with a lot of culture, a lot of youth, a lot of nightlife. The economy (although the Spanish think they are in crisis), is much more stable than in Argentina. The feeling of knowing that I will return the following year and the prices will remain the same is indescribable. It gives you a lot of peace of mind to live in a place like this. There are many Argentine colleagues living in this city.

Electronic music is growing. Although I feel that it needs to grow a lot and the production companies should open the doors to new genres and new artists.

Are you a Buddhist? Why does that religion appeal to you?

Since I was 18 years old, I started a path of personal and spiritual evolution. Life itself sometimes takes you to a place that the day you arrive you realize that that path was always in front of you waiting for you. I have read many spiritual and religious books, and honestly, the religion with which I felt most identified, without a doubt was the Buddhist. It is a religion which does not try to convince you of anything. Let yourself make your way and realize what religion itself raises.

I feel like there is a lot of human suffering related to attachment. The attachment to a partner, to money, to the material. When your head really clicks, you start seeing things you didn’t see before. Begin to value things that you did not before. That moment, in Buddhism they call it Bodaishin. That awakening of spiritual consciousness. This is where my stage name was born. I honestly don’t consider myself 100% Buddhist. Nor do I know if I will be in this life, perhaps in the next … but I try to carry certain ideals of religion in my day today. I am convinced that this is the way, and my idea is to share this message through music. When there is music, there is no ego, right? Union only.

What else are you working on, what’s next for you now the album is done?

Well, I was working really hard last year to be able to launch my own record label, which was called Circle Of Life. Currently, COL is a channel where we launch monthly podcasts and music like Free Download. We also have small interviews with the artists who passed through our channel. I plan to release it in March, and it will feature 10 gripping melodic stories, all of which are composed by amazing artists. I am also working on some remixes, and other personal musical projects, which I will see later in which home they will stay!

What are your hopes and dreams and goals for 2021?

Mainly, worldwide. I hope that we can all overcome all the consequences that this pandemic is leaving us. That the flights return to normal, and that the nightlife returns to what it was, with all the corresponding protocols. It’s a shame that artists have to look for work from something else to survive. Art is pure love, it is what gives us that impulse as human beings to continue enjoying life. As a goal, I decided to take Circle Of Life to the highest possible level throughout 2021, to be able to do some Showcases, and to continue contributing my grain of sand to the scene. A dream would be to be able to play in Burning Man, but we’ll see how things turn out. Thank you very much for the space! See you soon 🙂