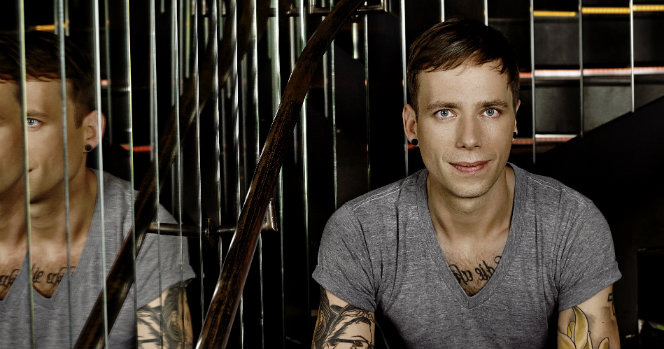 “EUCH DIE UHREN UNS DIE ZEIT”, is an idiom which translates as “You’ve got the watches, we’ve got the time …”, and it’ss way more than just an album title. It’s a specific mindset perfectly reflecting on a way of life cultivated by the artist known as Dirty Doering who first came across this dictum throughout his time as a resident DJ at the legendary Berlin-based Bar25 venue. And nine years ago this idiom ended up as a tattoo on his chest, mirror-inverted. So one”s only able to decipher this writing standing in front of a mirror alongside Dirty Doering, naked.

We took the time to sit down and have a short chat with this master at work. Dirty Doering talks about the journey and how this stunning album came to life. On top, he made us a sublime guest mix to enlighten your reading pleasure. Enjoy the music and read!

How has your summer been treating you so far this year? Lots of gigs, festivals?

A lot of sun, amazing festivals and the summer was very hot!

Congrats with the new album “Euch die Uhren uns die Zeit”. 12 tracks are quite a lot. Want to talk us through the creative process?

I collected ideas during my travels throughout the world. These ideas I brought to my studio and worked them out. In the end, a lot of tracks came out and I choose these 12 because they create a versatile package which can be listened through in one.

When did this all start, and when did you decide it was good enough to release?

It all started last year and during the last winter, I decided that they would be ready to be released.

The title, purely translated ‘You’ve got the watches, we’ve got the time’, must have a special meaning for you. Want to tell us about it?

I have this saying as a tattoo on my body and one day I was standing naked in front of a mirror. When I saw it, I just knew that this would be my album title.

How has your music evolved over the years and how does this reflect in this new album?

During the years I always tried to create a kind of Dirty Doering style of music. My first album is as you could say the result of this creative process.

With some many things at hand, where do you draw your creative influences from to create an album like this?

As I said before, I create my ideas during my travels. When I travel I have a lot of time to spend at airports, on planes or trains or even in the car.

You’ve decided to release it on your own Katermukke imprint. We believe it fits, but why this decision if there are many other great labels out there?

Katermukke is my own label, it was always clear to me to release it there. Everything else wouldn’t have made sense to me.

If you could describe your perfect creating/creative environment, what would it be? Look like, smell, vibe, people around vs solo?
An airport lounge full of people from all around the world.

The relationship with the audience is crucial for a DJ, and yet it seems to be a fragile one. How do you see, as an experienced artist, the balance between giving the crowd what they want and treating them to something new?
This balance is something I have to deal with every time. I think it’s important to be able to play a versatile set every single time. If you manage that the people on the dance floor forget about time and have the feeling that time flew by during your set, you did a good job.

If you manage that the people on the dance floor forget about time and have the feeling that time flew by during your set, you did a good job.

People are often speaking about the demise of the club scene, but the experience has remained as potent as ever. Why, do you feel, has the club remained such a great place for the discovery and appreciation of electronic music? How do you see the relationship between music and the space it is performed at?
I don’t understand that people are talking about a demise of the club scene. Clubs open and close again, but they will always exist. Also, it’s not the space where the music is performed at that is decisive for the relationship between music and the space itself. It’s more the people, the atmosphere they create.

It’s not the space where the music is performed at that is decisive for the relationship between music and the space itself. It’s more the people, the atmosphere they create.

When there’s more music than one can possibly take in, it is becoming increasingly hard to know what constitutes an original and a remake anymore. What’s your opinion on the importance of roots, traditions, respecting originals and sources?
Always respect the original and source of music. If you create a remake of an original one in that way, it might lead the consumer to the original version and you might have created a link between two totally different kinds of music.

Being a musician is quite demanding and also requires a lot of travel. How do you relax when you’re not on the road, in the studio or at your desk running your label?
Nature, sports and friends.