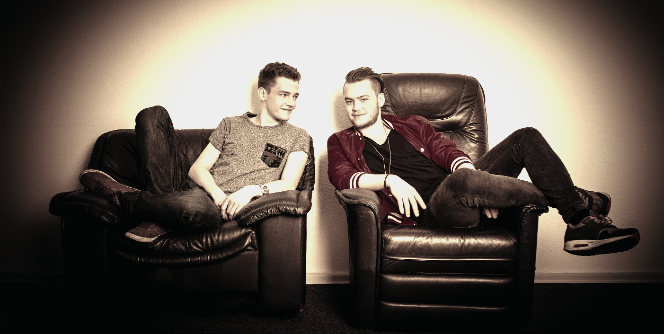 Interview: Tanzgemeinschaft sits down with Younotus

h4>IT’S ALL ABOUT MUSIC
Berlin Deephouse scene is infiltrated since Tobi and Gregor founded YOUNOTUS in late 2013. Before that both of them played as solo artists for a couple of years and after long and excesssive nights in the studio together they realized their identical passion for cheerful but also melancholic Deephouse. Since then they produced their first track ‘Mondscheinbaden’ which got over 10,000 soundcloud plays in no time. Thereby famous DJ and producer Stereo Express took notice of this young couple who immediately singned YOUNOTUS to his label and booking agency ‘Love Matters‘.

Gregor and Tobi can always been found in clubs all across the nation with a breezy attitude and are able to achieve getting even the last dance grouch onto the dancefloor by playing dreamy but also danceable sound.

You guys have been into music before YOUNOTUS for sure. So please tell us something about your musical history.
That’s right. Tobi started playing in bands at the age of 14 and from there on he had a journey through a lot of genres like Hiphop, Reggae and Ska. Last but not least he got in touch with electronic music which he totally fell in love with.

Gregor visited a musical school for 9 years but always was interested in other genres like Jazz and Hiphop because of his father and brother. One day his big brother showed him some Tech House music. It was love at first sound.

What have you been up to recently? You are still doing a lot of gigs and remixes, don’t you?
Yes, we can’t tell how happy we are about touring through our country and even beyond. We just had a really great weekend in Luxembourg where we played two gigs and of course there a lot more gigs coming. You can check our tour dates via younotus.com.

We produced a lot of songs for different labels so far, so that we have seven pending releases. But two releases just came out: First a remix of Heymen’s ‘If I play your game’ we did together with Alle Farben which came out on January 9th. We are really happy about the attention it gets on our soundcloud page. And second we released our ‘Touch My Heart’ EP on January 12th via our second home KALLIAS.

We are really grateful to finally release all the stuff we worked on in 2014. Our next releases will be a remix for ‘Noise & Breithaupt – Pages’ and also a remix of the evergreen track ‘Telepopmusik – Breathe’ . This track will be released on our own label Love Matters. Furthermore there will be serveral great collabos with our good friends Stereo Express, Alle Farben, Klangtherapeuten and many more. We are really looking forward to 2015!

You have worked with well known DJs like Stereo Express and Alle Farben. Whom have you most enjoyed working with?
Both of them are really great artists. One year ago we would have never imagined working with them. As mentioned before we got very good friends with Frans and Chris in the meantime. We also built a complete new studio together with Stereo Express in the past months which became even better than expected.

Who is the artist who always inspired you and enjoys your respect?
Because of Gregor’s musical background jazz musicians like Pat Metheny always did a great job as idols and inspiration. But also modern artist Flying Lotus is very important for him.

In Tobi’s case it’s hard to give his inspiration a name because he gets inspired by tons of things. It’s not only one artist. It can be a single sound, a painting or even just a colour.

Where did you have your greatest performance in the last months? What was it about?
There were a lot of nice gigs in the past but there is one we will always remember: During the closing week of the Magdalena club in Berlin we played on the mainfloor and there were more than 1000 people going crazy on our floor. This was a very intense night and experience. Also it was Tobi’s birthday so there were a lot of our friends celebrating with us. When we played the last track all our friends were dancing next to us on the stage. That was a really great moment.

How would you describe the sound of ‘touch my heart’?
‘Touch My Heart’ is definitely a clubby EP. The a-side is definitely a peak time track and the b-side ‘Two dollar fantasies’ is a perfect intro for a set. We are lucky enough to test the tracks on the dancefloor before the release and we noticed that this EP is very strong and has a lot of energy. If you place one of the tracks in the right moment you can make the crowd go crazy.

You have reached a lot so far. Where do you see yourself in the world of electronic music in a few years?
To be honest we never think about that. We are just living in the present and try to do a good job for ourselves and our followers. If we are still up on stage and producing in the studio in five years we are really happy but you never know. Maybe we quit and begin to do astronauts training.

You have been really into building up your new studio right? On which projects are you working on right now?
Yes, we did! First week of January was really hard because we had some deadlines for our productions, so we worked on our studio by day and produced our tracks by night and just forgot sleeping. That was exhausting but it was totally worth it. Now we have more time again and we are able to focus on all the things that we missed out in the past days. We start improving our live set, producing new tracks and just spend some time with our friends.

YOUNOTUS YOUNOTUS Love Matters
Interviews
PR agencies, producers, dj’s, send us a message whenever you are interested in an interview! »