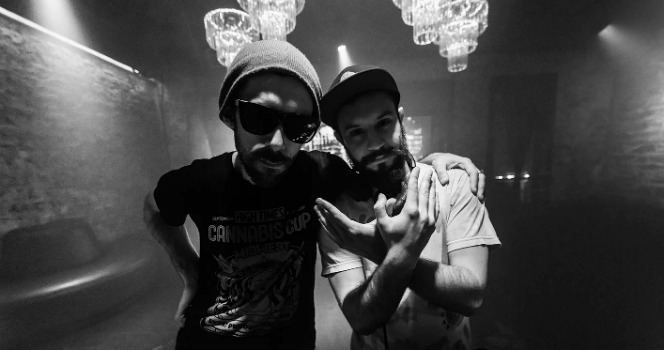 KIVI is a DJ and production duo made up of Alonso Garcia and David Sien from Austin, TX. Kivi is best known for their hypnotic bass and innovative take on the tech-house genre. The pair achieved their first notable success in March of 2019 with their acclaimed track “After Party” being featured on Claude Von Stroke’s legendary Dirtybird Record Label’s Miami Compilation.

Following KIVI’s first Dirtybird Record release, the duo has continued to release new material with each track entering the Beatport charts while holding a strong position in the top 10.

The duo has remained one of the most sought-after DJ duos in the Austin-area and continue to collaborate with some of the largest touring acts in Texas. Take a chance on the new take, a chance with KIVI. 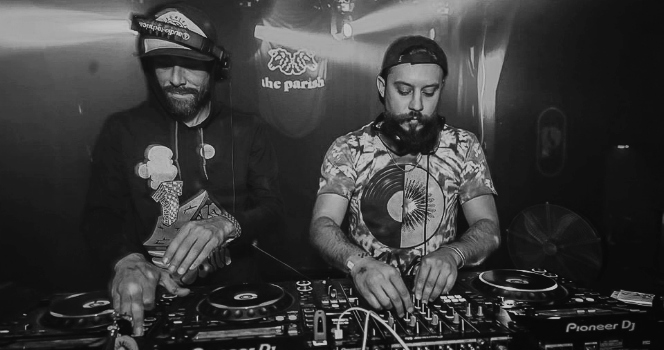 Hi Alonso & David! Tell us more about Kivi, how did you meet and why did you start making music together?
ALONSO: David and I met at an afterparty on 6th street (Austin’s crazy party street). He told me he was a music producer and I had already been a DJ downtown at local venues for a couple of years. At the time David lived in a small blacked out 9×6 square feet studio packed with speakers, lasers and smoke machines. I was a resident DJ across the street so I decided to invite him to come to live with me so he didn’t have to live in a music room.

From our first interaction, we knew we were musical brothers from different mothers.

DAVID: From our first interaction, we knew we were musical brothers from different mothers. Alonso had the DJ skills and showed a big passion for learning production. It took about a day after meeting in person to set up a production session. We realized right away that working together came natural and we both had things to teach each other. After our first jam session, Alonso asked me to move in with him and we have been working in the studio nearly every day since!

What are the advantages of playing in a duo?
Being in a duo is hugely advantageous if you can set it up right. First off, having roles is really helpful. This came very naturally to us because over the years we knew what each of us is good at. David is a creative genius and has amazing graphic design skills. Alonso is great at keeping things organized and the daunting task of finishing our projects.

Having a partner to pick up the slack is super important. Our production is very much David starting the songs and Alonso finishing them. Being a duo also allows us to maintain our other schedules. We play a lot of separate shows as David leaves a lot for work. He works for a marijuana magazine called “Hightimes“, travelling around the US putting on events known as “Cannabis Cups”. Alonso holds down a lot of the Kivi shows to keep the production going. We both know what role comes to us so they are vice versa if needed. Playing together is also super thankful if one of us isn’t feeling very social or inspired because know how to encourage each other. “From our first interaction, we knew we were musical brothers from different mothers.”

Playing together is super thankful if one of us isn’t feeling very social or inspired because know how to encourage each other.

Being on the road half the year must be very inspiring. Is travelling a big influence on your productions? Any plans for combining this with music?
ALONSO: I have been travelling my entire life, always looking for the next adventure, the next thrill, the next new place. I lived in Venezuela, Australia and Canada before coming to the USA so I basically grew up travelling. I’m also really inspired by the things I experience around me. Usually going to a festival does the trick. After attending Dirtybird Campout this year, we came home and wrote 13 tracks including some of the best tracks we have ever made! I am also highly influenced in my music by my emotions and try to always keep positive happy people around my circle of friends. This is the reason why our music is mostly upbeat and party-driven.

DAVID: We are melody-driven and heavily influenced by steel percussions. I took a year off in 2016 to focus on a blog where I would travel to countries where marijuana is illegal. I wrote about where and how to find it, and not get caught in the process. Out of the 26 countries, I visited I was able to do my job in 21! I’m also inspired by the music culture I have experienced in Morocco. Sitting around a fire, creating beats with hand drums whilst sipping mint tea and smoking hash with my closest friends and family, under the stars of the Sahara desert. Ahh, I’m ready to go back now! We are now working on something huge and we’re hitting the road and bringing our beats across the US. My goal is to play shows in Europe and Asia, would really love to experience that with Kivi.

David, you have lived on top of a night club in the heart of Austin’s entertainment district. How’s the techno scene in Texas and where did all start for you?
DAVID: It started in the late ’90s. I was super deep into music like The Chemical Brothers, Aphex Twin and The prodigy and purchased my first sequencer and sampler. I dove headfirst into the culture, performing at house parties and shitty whisky bars. Touring DJ acts were unlikely to come through in Texas but some major players made it out to places like Cowboys dance hall in San Antonio. Back then it didn’t necessarily matter who was making the record spin, you just needed a warehouse and speakers. No longer really underground, the Texas techno scene is thriving. It’s good and bad but mostly I’m super grateful for the memories of the early days.

After a decade of DJ experience gained at different venues and raves, what’s that one party you will never forget?
ALONSO: The one I will never forget just happened! Seismic Dance Event right here in Austin. It was a really special moment for us because not only was it our first festival playing as Kivi. It was right here in our home town with locals and very special people. We have been gaining a lot of momentum this year and it all leads up to this moment. The festival was basically sold out and a lot of our friends from in and out of town were there. Walking out to the Secret Garden Stage all we could see were happy faces everywhere. I remember looking to my left seeing so many familiar faces just dancing like crazy. At one point we dropped our favourite unreleased track and hearing the crowd scream at the drop felt amazing! Thanks to Seismic Dance Event and all of our Austin homies for creating an amazing and unforgettable moment in our lives!

At one point we dropped our favourite unreleased track during Seismic and hearing the crowd scream at the drop felt amazing!

DAVID: I will never forget the raves we hosted in Austin at this small venue called “The Haven”. Every Saturday night we’d open doors around 2 am and played deep into the morning sun. Everything about it was so raw and people knew it was the late-night spot! We ended up getting shut down but those 3 months will never be remembered nor forgotten. The Haven after parties we were hosting, were the main inspiration to our single “After Party”.

Congratulations for signing this track with Dirtybird records earlier this year. What’s the story behind “After party”?
Thank you! At first, we were contacted to be featured on the bird feed, which is a platform of Dirtybird to share new music. A few days later the manager reached out to us because he wanted us on the album. We were so stoked! Working with Dirtybird has been nothing but an amazing experience and we are so grateful for all they do. “After Party” was a track that we made after playing weekly after-hours events here in Austin. We were so tired from staying up till 7 am to play shows every weekend. So we made a track about it. Interestingly enough, Dirtybird signed it and now we play even more after-parties. These kind of parties are our speciality because the music we make is very trippy techhouse and this works really well at after-hours events.

After-parties are our speciality because the music we make is very trippy techhouse and this works really well at after-hours events.

The end of the year is approaching. What are Kivi’s highlights? What can we expect for the upcoming year?
2019 was a dream come true. We worked so hard and it really paid off nicely. Dropping a record on Dirtybird was a game-changer for us. Since then, we have done amazing collaborations and made a lot of new friends. The biggest highlight has hands down been the connections we made with such amazing people. We were also featured on the Dirtybird Miami compilation album and held a number one spot on Beatport Tech House releases.

Kivi is going to start the new year strong with brand new music. We have close to 13 collabs, with homies like B&E, Alex Michael and Tko, that are close to finalized and have already been picked up by different labels. Our new radio show, in collaboration with Wejack, is coming out soon and we’re working directly with Gettoblaster for an upcoming tour. They have been great supporters of us and have helped to guide us and include us on so many fun things. Very happy and flattered that they want to share this amazing experience with us!

On top of this, we will debut our new label called “Tall Door records”. We hope to showcase smaller artists and will be accepting entries soon.

Thank you guys. We’re already looking forward to more of your bouncy beats coming our way!